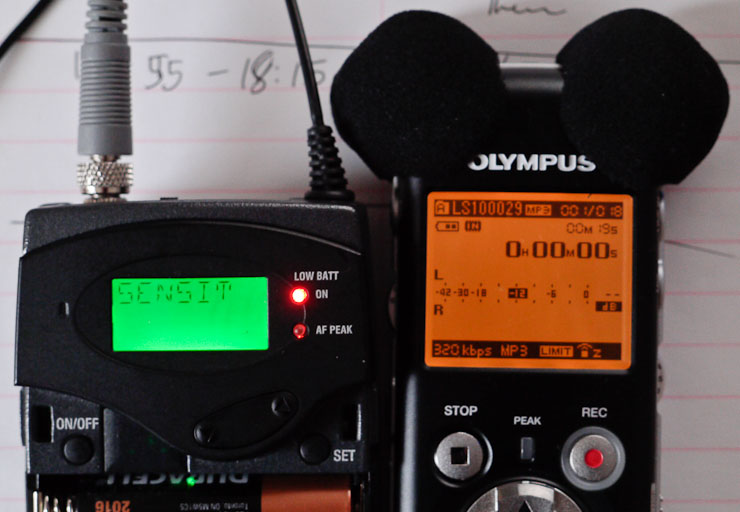 This past Friday I was recording an interview using my Olympus recorder and a borrowed set of Sennheiser G2 wireless lavalier microphones, and the whole time, despite having the levels set well on my Oly recorder, I thought that there was some distortion to the audio.  Well, lo and behold, there was a reason for that: the Sennheiser’s sensitivity was set way too high.  Did I check this first?  No.  Did I think to stop the interview and re-check the settings on the wireless mic?  No.  Was that a mistake?  Yes.

I would have been much, much happier if its sensitivity had been dialed back to -30 dB, as seen on the left.  What happens if you don’t is that talking in anything but a  low voice/volume leads to the mic clipping the audio considerably.

And one of the problems with the Sennheiser design is that the microphone bodypack has a “peak” light to let you know that there is just too much sound for it to handle, but the receiving end, which plugs into the recorder, has no such light.  Does it have a level?  Sure, but the screen is small and is only illuminated when you’re manipulating the menu.

The take-away is that you have got to be careful whenever introducing a relatively unfamiliar bit of equipment into your work-flow.  When you aren’t so careful, the results can be pretty bad.  Not salvageable, but not the world’s greatest, either.