I’ve been battling a cold ever since grad school got out for summer–a great way to celebrate the end of the year, but at least it didn’t strike during the week before when projects were due!–but yesterday, for the first time since getting home, I felt like making some images.  The bird activity at home has been really great, although I picked a slow day to photograph (less likely to disturb the migrating species, though!).  The suet feeder has been getting a lot of activity from our resident, nesting pair of Red-bellied Woodpeckers and our Downy Woodpecker, but it was really the nuthatch that let me get a good look at him.

Three flash units were set up on stands, combined with the late-afternoon sun, made for a four-light setup, albeit back-lit.  I was trying to get some rim-lighting, and between the sun and another strobe back and to the right, I figured I would get quite a bit.  I certainly got some, but not quite what I wanted.  My key light was backed up quite a bit, and I had a fill on the left, which is casting the nuthatch’s shadow that you can see on the suet feeder.

More after the jump…

For a first attempt at multiple flash for bird photography, I think the result is OK: the moment is good, but the lighting could still be better.  Working a back-lit situation is hard to begin with, but it’s didn’t seem feasible to photograph this feeder with the sun to my back, because the background would have sucked.  Also, there are only so many “bird on a feeder” photographs that one can bear to create….having some (for stock) makes sense, but I need to be more patient and wait for them to land on the perches Dad has set up near the feeders.

I’ll definitely be trying this some more throughout the week I’m home.

One thing that did amuse me was this Black-capped Chickadee who thought that one of my strobes made for a good perch: 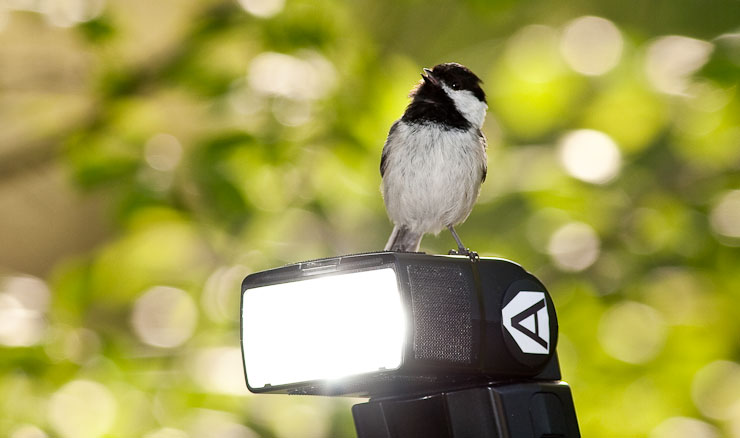