“Fill flash.”  It’s a term familiar to pretty much everyone.  The only thing that makes it more interesting is when you decide to take the flash off of the camera and place it on a stand.  This frees up the photographer to place the light where it should be, not where the camera is positioned.  For wildlife photographed with a 500mm lens, placing the flash on axis makes a lot of sense–on a cloudy day just dial down the flash to -2 or -3 EV (via ETTL), put a Better Beamer on there, and call it a day.

For this assignment I was working with less space than I would have liked, and what began as a completely open storefront was actually being boarded up by the construction worker, Ryan McCullen.  I really wanted a second light: one inside (behind him) to work in tandem with the flash that I had with me.  Of course, before he boarded up the windows, I had two lights (the sun, hopefully operating at full power…).

I triggered the flash on the light stand with some “Poverty Wizards”–the cheap radio remotes from Hong Kong that are all over eBay.  I do own a Canon remote trigger, but it is based on infrared line-of-sight, and in bright sun it simply doesn’t work.  If I could afford Pocket Wizards…some day.  Until then, the cheap eBay remotes seem to be working!

With a little help from the fill light slider in Lightroom, the image opens up pretty nicely, and the juxtaposition between McCullen working away and the motley crew of people hanging out on the street–“We’re All Vampires” does amuse me.

More after the jump…

Here’s a basic breakdown of my lighting setup, as well as the original (untoned) image: 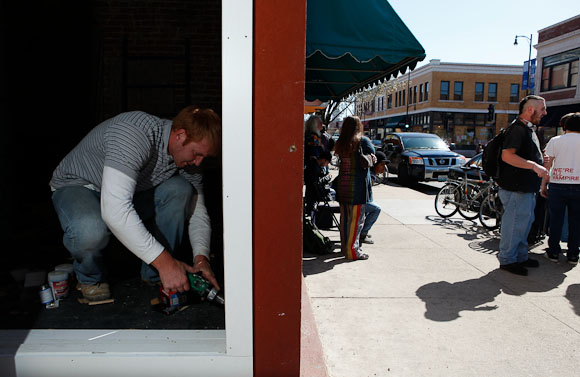 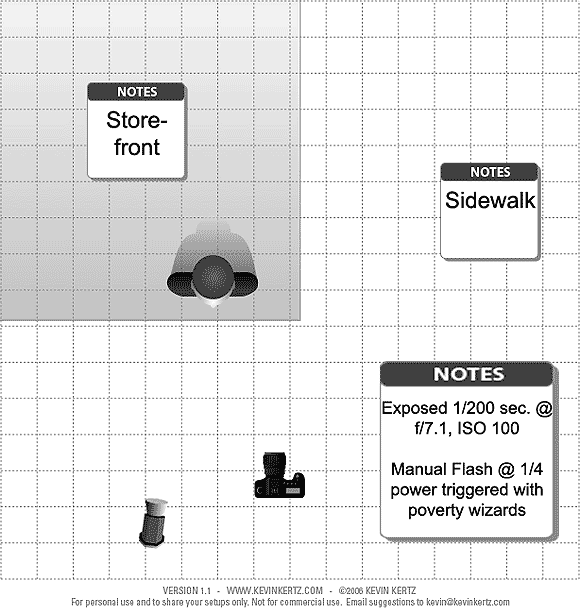