While in Saint Louis last weekend, I dropped in on the site of my final project from Fundamentals of Photojournalism (from last semester), Wild Bird Rehabilitation.  Unlike most of the (few) bird rehabilitation centers in Missouri, WBR focuses on songbirds.  The birds that they work with are brought to WBR by concerned citizens, often people who have birds crash into the windows of their houses, or mauled by their pets in their yard, who want to do all that they can for our avian friends.  This time of year, March through June, lots of migratory birds come through the area along the Mississippi Flyway.

When I came in last week, Diane Dorter, one of three paid staff at WBR, was teaching volunteer Lizzie Vreeland how to care for birds at WBR’s “emergency room.”  Vreeland has been a volunteer at WBR for close to one year, but recently became interested in working with the most critical avian patients at the facility.

I brought along my small light stand and wireless trigger to set up the flash in the corner of the room to bounce off of the ceiling for some fill.  The florescents in the room have a color temperature between tungsten and florescent.  To try to match my flash to the light in the room, I attached window green theatrical gel over the flash head.  However, I was not happy with the results, so I replaced the green for the color temperature orange (CTO) gel.  This was better–much better–but still not perfect.  I realized later that stacking the gels would have been the solution to my problems.  Next time!  More after the jump…

Using theatrical gels to blend the color of the light produced by the flash with the light source in a room is nothing new.  What is newer about the technique is that digital capture makes switching the white balance from daylight to tungsten or florescent far, far easier than was ever possible.  (And there were only two options, then: daylight- and tungsten-balanced film.)  David Hobby–the Strobist–has an excellent explanation of how to use gels with speedlights.

While some processing in post is still required, the gels can get you very, very close to the desired result.  To give you an idea of how close you can get with the gel and white balance combination, here is the version of the photograph above before tweaking in Lightroom and Photoshop: 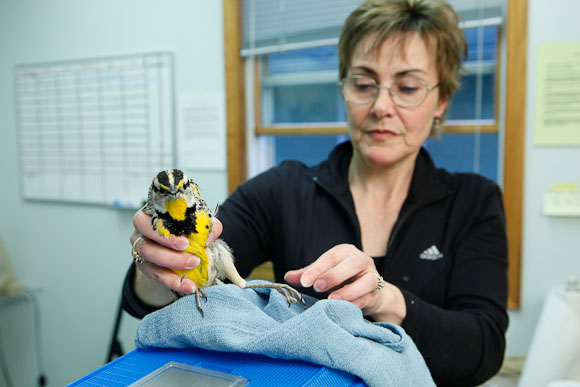