Last weekend I went into the studio with a bottle of Patrón tequila and one clear idea of how to light it, only to scrap it and move on to plan b.  But then I decided that plan c–one that I had not even considered–was really going to be the best route.

My idea was to have the lime resting against the bottle on a sheet of glass with a dark background.  On another day, with different materials (like a giant sheet of black, glossy acrylic), it could be a piece of cake.  Instead, I ran into problems from the start: the dark cloth I had taped to the softbox kept falling off (Light, Science and Magic suggest making the dark background the size of the frame, and then butting that right up against the light source).

I threw out that idea and switched to bright field illumination (giving the glass black lines for definition).  It’s easier, but it doesn’t have the same oomph as something lit via dark field patterns.  I could have quit with this image, because it’s passable, but it’s also incredibly dull.  I don’t think even Crate and Barrel would want to use an image like this one in their catalogs.

My bank of ideas was dry, but a good friend of mine, Mito Habe-Evans, suggested making a “beach” for the tequila and lime out of some sand made for models and dioramas that was in the studio.  Combined with some blue gel, the result was actually pretty good. More after the jump…

Initially, I went for the look of a sunny afternoon on the beach, but the tequila was turning blue, so I added a white card behind the bottle.  That wasn’t enough, so I placed a fourth light underneath the bottle–under the light table.  This made the tequila bottle glow, and dominated the other lights, making the scene look much more like twilight.

I adjusted the lighting ratios to prevent this throughout the rest of the shoot, but I came back to this one because I think I like its mood the best.  Especially when combined with a little advertising verbage… 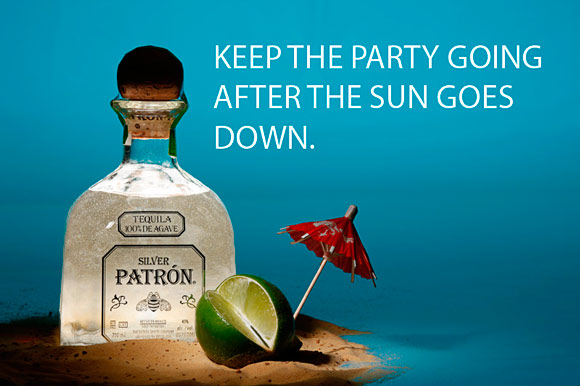